We look forward to seeing you on Sunday.  Please go to our Visitor's Information page for service details including information about our Sunday School program and Child Protection Policy.
If you aren't able to join us face to face, you are encouraged to use the Worship Service Resources provided here* (click on this link) in your homes.
*Resources will be updated later in the week. 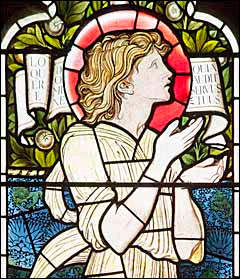 The boy Samuel ministered before the Lord under Eli. In those days the word of the Lord was rare; there were not many visions. One night Eli, whose eyes were becoming so weak that he could barely see, was lying down in his usual place.  The lamp of God had not yet gone out, and Samuel was lying down in the house of the Lord, where the ark of God was.  Then the Lord called Samuel.

Again the Lord called, “Samuel!” And Samuel got up and went to Eli and said, “Here I am; you called me.” “My son,” Eli said, “I did not call; go back and lie down.” Now Samuel did not yet know the Lord: The word of the Lord had not yet been revealed to him.

A third time the Lord called, “Samuel!” And Samuel got up and went to Eli and said, “Here I am; you called me.” Then Eli realized that the Lord was calling the boy.  So Eli told Samuel, “Go and lie down, and if he calls you, say, ‘Speak, Lord, for your servant is listening.’” So Samuel went and lay down in his place.

The readings for this second Sunday after Epiphany:
Psalm:  Psalm 139:1-6, 13-18
First Reading:  1 Samuel 3:1-10
Second Reading:  1 Corinthians 6:12-20
Gospel:  John 1:43-51
Collect:
Almighty God,
your Son our Saviour Jesus Christ
is the light of the world.
Grant that your people,
may shine with the radiance of his glory,
that he may be known,
worshipped, and obeyed
to the ends of the earth;
who lives and reigns
with you and the Holy Spirit,
one God, now and for ever.
Posted by CHS at Monday, January 11, 2021